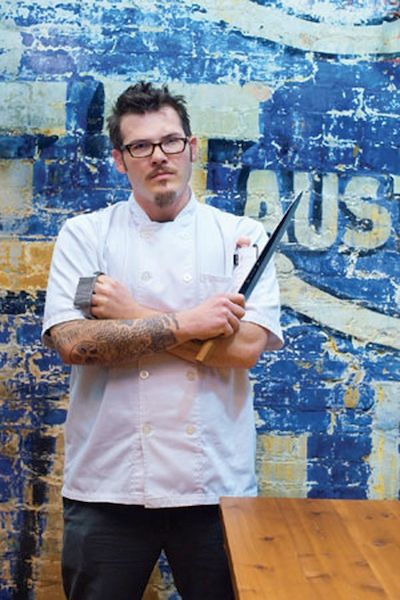 In addition to being a bit of a corsair water-dog, Mat is also a native Texan and longtime Austin resident. He is descended from members of Texas’ “Old Three Hundred,” who also signed the Republic of Texas into being at the Convention of 1836. In keeping with the rebellious & adventurous spirit of his ancestors, Mat has always chosen a path all his own, and it is through this that he was eventually bewitched by Epicureanism and later the life of a freebooting cook. Mat eventually hoisted sail for Vermont, where he studied intensely at the New England Culinary Institute, and mostly froze, before disembarking to warmer climes, eventually settling on Austin. Mat’s prior enlistments have included Vespaio & Jeffrey’s, and he was also Chef de Cuisine at Uchi, as well as Corporate Executive Chef for Kenichi Restaurants. Most recently he was partnered in the creation & execution of the occult Rabbit + Hat supper “club.” As any Jolly Old Roger will tell you, Mat says “it isn’t so much the style of the blade, but more the skill in the wielding,” and it is in this where much of his culinary philosophies lay. The food at Swift’s Attic is wholly comprised of this sentiment, and as such is comprised of as wide an array of tastes & flavors as its itinerant jack-tar chef.