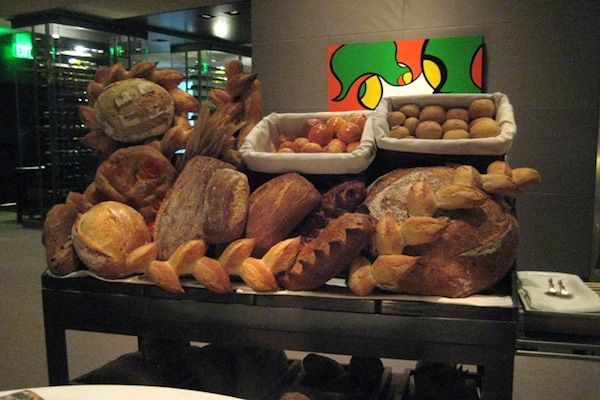 Paris or Vegas? Paris or Vegas? This time the Keeper Team chose to eat dinner at Restaurant Guy Savoy at Caesar’s Palace. The decision was largely influenced by a recommendation from a good friend, Sommelier June Rodil, whose culinary input we trust and is the Beverage Director at one of our favorite Austin restaurants, Uchi. After recently enjoying lunch in Paris (blog post soon to come) at the French 2 star Michelin restaurant, Arpege, we wondered how this American 2 star Michelin Savoy restaurant would compare. Would our French dining experience be overshadowed by the Vegas culture or could Guy Savoy sustain his bona fide French flair?

In typical Vegas Style, the restaurant’s entrance was grandiose. We were greeted warmly, and our table was ready for us to begin our culinary adventure. We were happy to see that almost all of the staff were French. We were told that none of the staff had ever worked at any of Savoy’s Paris restaurants. Although they all worked in Las Vegas before the restaurant opened, they said they chose to apply for jobs at this “special” French restaurant.

From the start, the staff made us feel as if we were dining at a fine Paris restaurant. We selected the “Prestige Menu”, which are the chef’s special selections of the night. The menu listed ten delicious courses in both English and French. Overall, each dish was superb, although the desserts were not as strong as the savory dishes. That is the only “critique” we can make, as we were extremely impressed with the meal, so please read on!

We experienced a new food pairing element – Bread Pairing! The chef believes that individual breads should be paired with each dish. The bread cart came by often to add a new slice of bread specially chosen to accompany the specific dish. This was something that we had never seen before! Our server warned us to be careful of our bread consumption as there were many courses ahead. He was right! 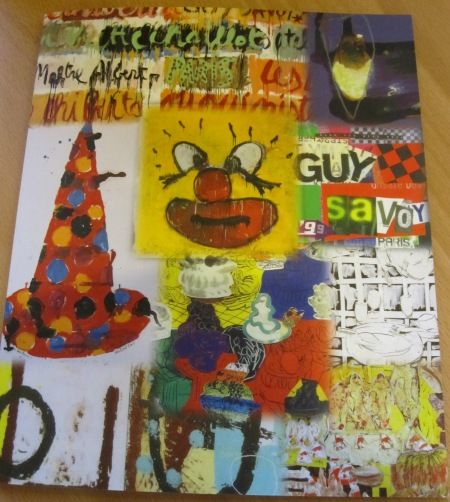 We had selected the food, and so it was time to pair the wine. The wine list was expansive, but we were able to identify a couple of great wines – an ’05 Mikulski Meursault Genevrieres and an ’01 Cathiard Vosne Romanee Les Reignots. Both were delightful and paired well with the various courses, especially when it was time for the red.

We started with a series of three Amuse Bouche dishes, compliments of the chef. The first was a torchon of Foie Gras “coins” with toast on a small skewer. It looked and tasted so good that we ate it before getting a good pic! Sorry! Here comes more Amuse Bouche… 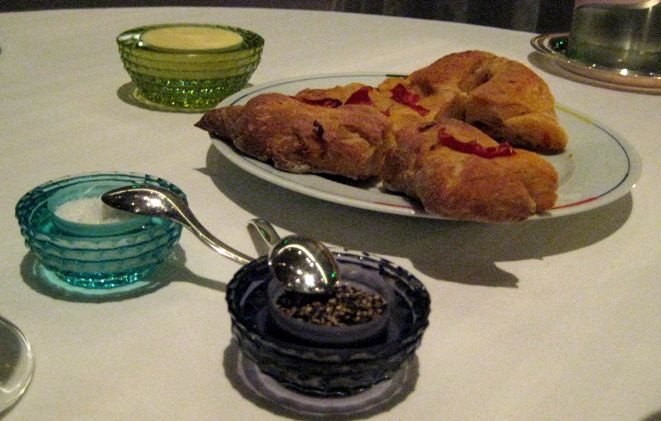 And the third Amuse Bouche dish was a broth that was a perfect way to start our meal. It came with a tomato powder to mix into the broth for added flavor. 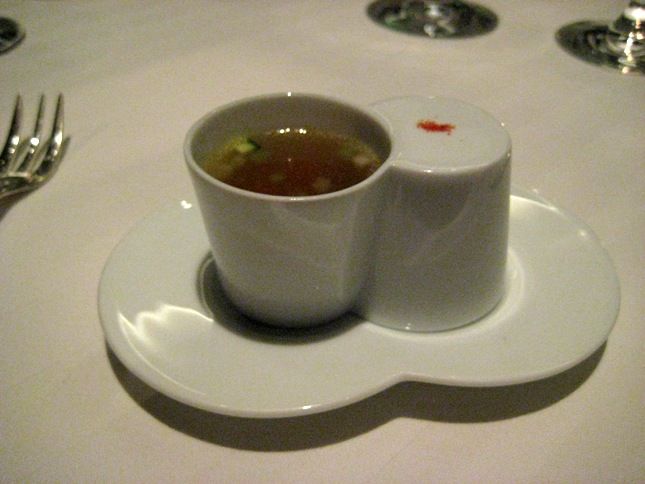 Amuse Bouche 3: Vegetable Broth with a Brunoise of Vegetables

Now it was time for our Prestige tasting menu to officially begin with the first course. The two oysters from British Columbia topped with an ice gelée and sitting on an oyster cream mousse was a delicious beginning to our French meal. This was paired with seaweed bread. We were off to a fantastic start! 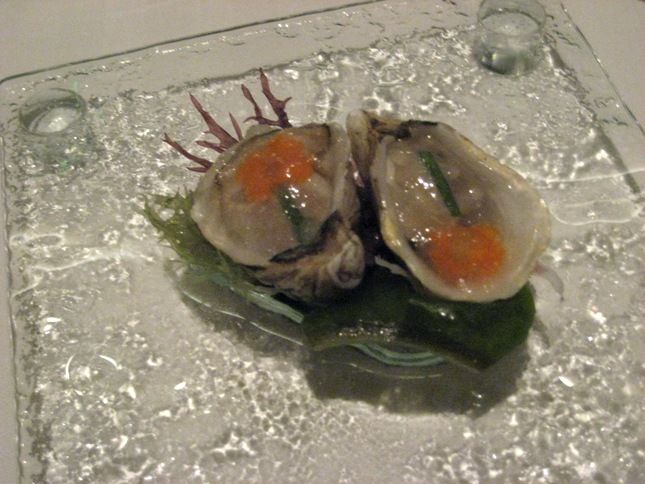 The servers then presented a marinated lobster and snow pea salad topped with seared tapioca and diced calamari in a lobster broth. This dish was also paired with the perfect complement of seaweed bread. 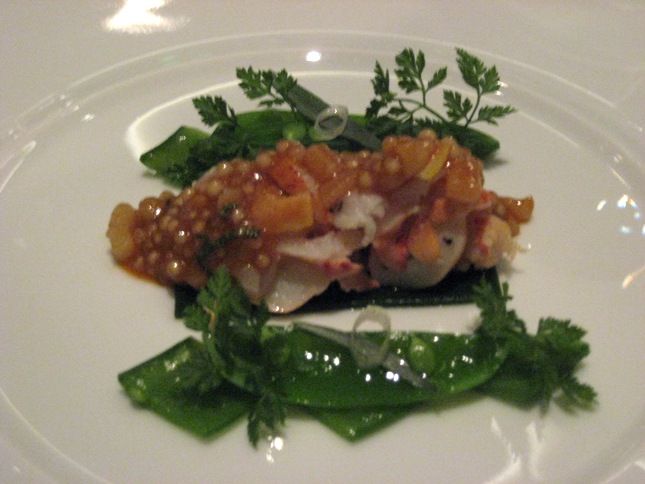 We didn’t think the third course could get any better, but it did! Perhaps, our favorite dish of the night was called “Colors of Caviar”. This was a parfait of various flavors and textures of caviar. Our tableside captain instructed us to take our delicate spoon and dip all the way to the bottom to get all of the layers in the same bite –and wow, was he right! The flavors embedded in each layer were incredible. This was paired with some of the best Ciabatta Bread we have ever had. We were excited for the Sea Bass that was on its way! 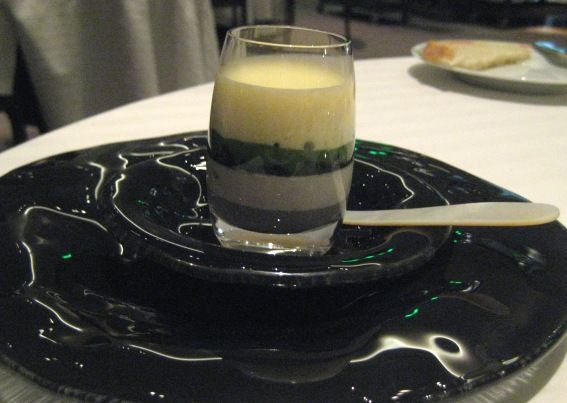 We enjoyed the perfectly cooked sea bass filet with extra crispy skin and swiss chard prepared and used in the following three ways. First, the swiss chard stalks were steamed and served as a base for the sea bass. Second, the greens of the chard were blanched and served as a side salad. Lastly, one leaf of the swiss chard was fried and placed as a triangular garnish. The sauce was both savory and sweet due to the combination of 5 spices, such as cinnamon, vanilla, and cardamom, to name a few. This course was paired with lemon bread that went perfectly with the flavors of the dish. 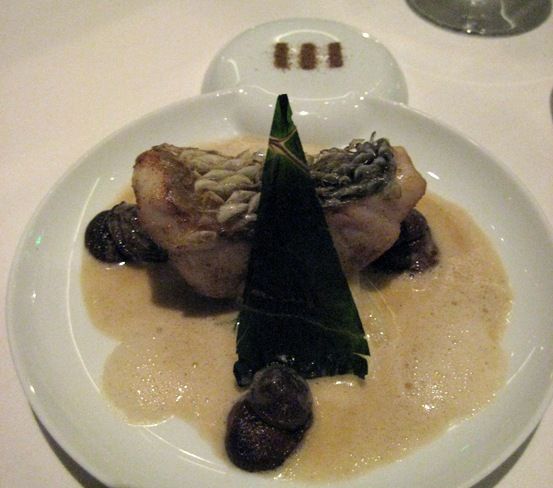 The next dish was probably our least favorite, but was very creative and interesting nonetheless. Foie gras accompanied with five different radishes were cooked in a “plastic” papilotte. The radishes were made into a bouillon. The pouch was presented tableside, and pierced so we could savor the aroma of the steam. It was then rushed back to the kitchen for completion. One Keeper member’s foie gras piece was perfectly cooked, but the other one seemed undercooked and stringy. The radishes had been pickled and seemed a little too tart. The pairing of caramelized onion bread improved the dish and made us believers of the addition of “bread pairing” in this gastronomic adventure. 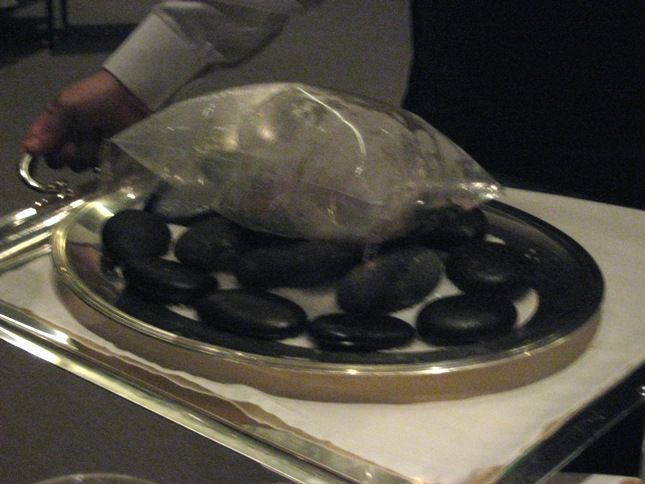 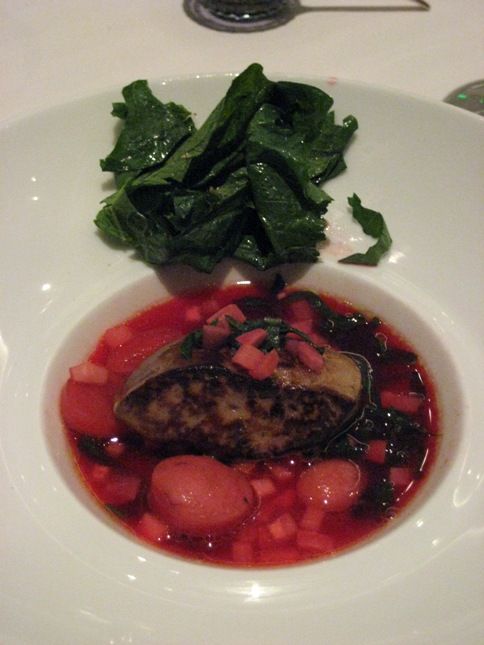 The next dish was a strong recovery, and it competes for dish of the night accolades. This delicious dish was an artichoke and black truffle soup containing vegetables and water. The chef prepared this incredibly thick soup with no stock or cream at all! (AMAZING!) We were told that it takes about three large California artichokes to make one bowl of soup, and we could believe it. You could taste plenty of the artichoke body as well as the intense flavors of the artichoke heart and truffle shavings in the soup. This was served with a brioche muffin half smeared with truffle butter. WOW! 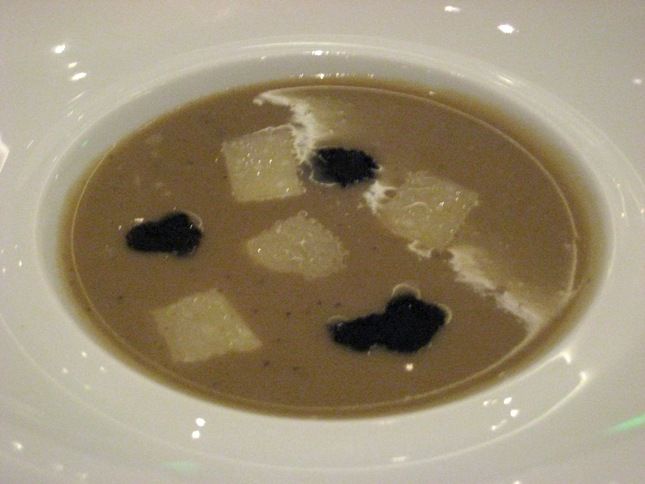 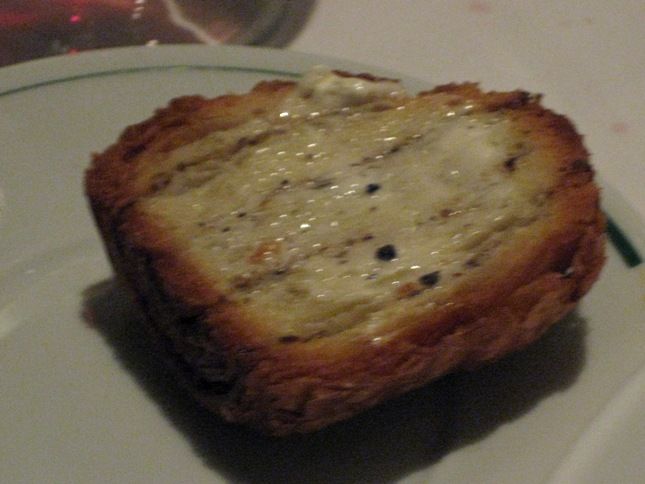 Here comes the “real veal”… The roasted veal chop was presented at tableside prior to carving. 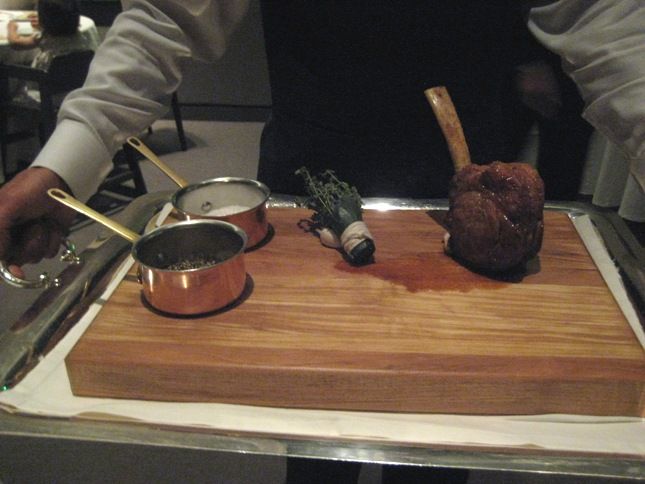 The veal, cooked “a point”, or French for medium rare, was delicious and tender. The veal was served with a Black Truffle Potato Purée. The vegetables were nicely al dente. The mashed potatoes with black truffle were more than we could handle at this point. Even though we were filling up fast, the twenty one grain bread complemented this dish extremely well. 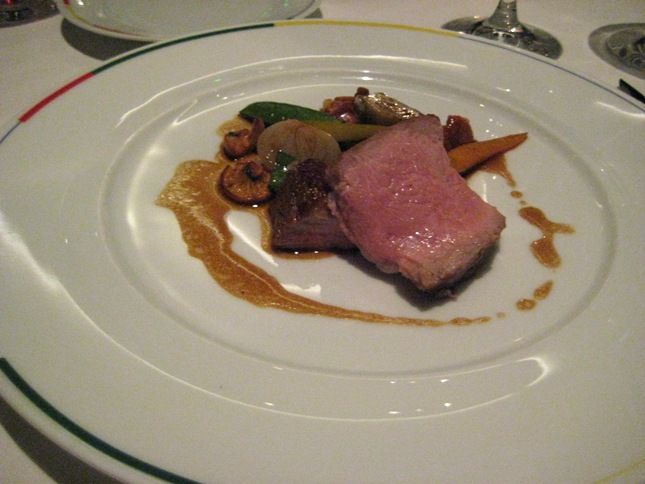 We couldn’t believe the cheese plate was next. It wouldn’t be French without the fromage! The cheese cart had a good variety of chèvres, hard cheeses, bleu cheeses, and soft cheeses. Our server (from Marseilles) was right on the money with his recommendation of a plain baguette rather than the fruity/nutty breads. 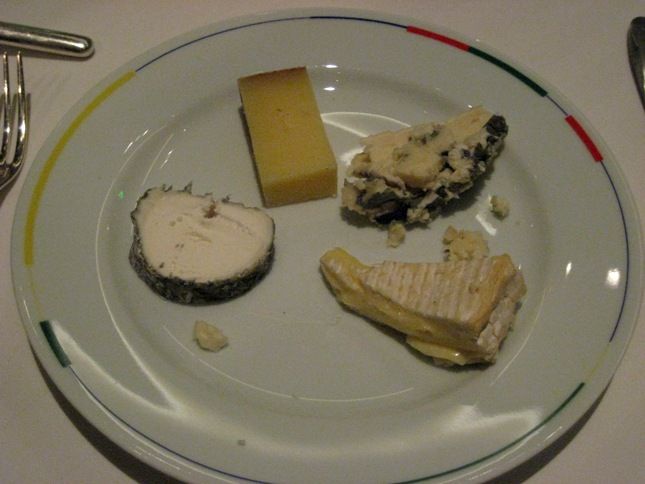 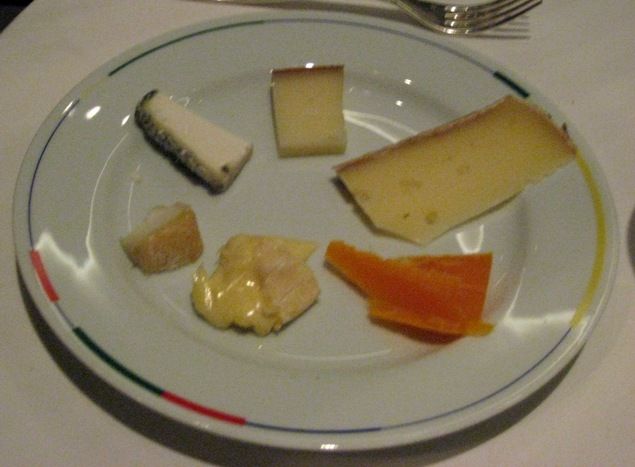 We were getting close to the end, but we knew from our Paris dining experiences that we couldn’t give up yet. The first sweet presentation was a mango sorbet with a milk foam. 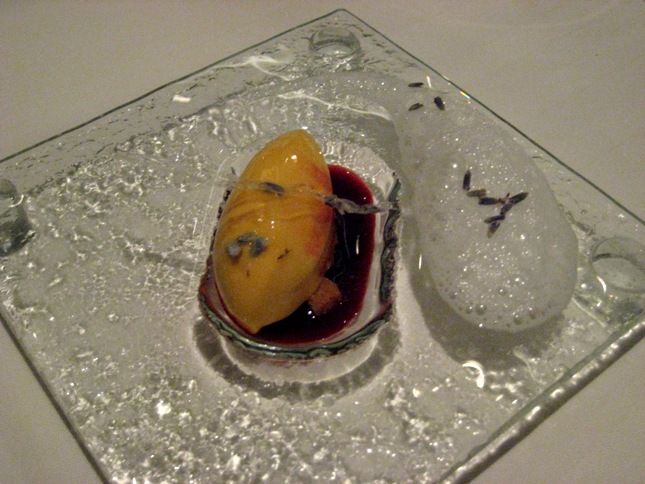 The pre-dessert was a dish entitled “coconut six ways”. This dessert was an extremely creative way of preparing coconut. It was not overly sweet, as many coconut concoctions can be! It was served granite and shaved. Guy Savoy certainly showed the versatility of coconut with this dish. 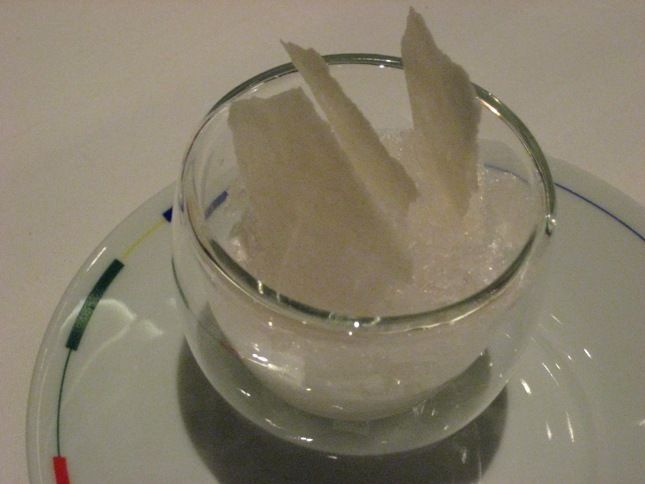 Next, the main dessert was a crunchy praline crust topped with a chocolate fondant, accompanied by a chicory cream. The blend of praline and chocolate was an interesting combination of taste and texture. We loved the Chocolate Fondant and Crunchy Praline, but the Chicory cream didn’t match well for us. 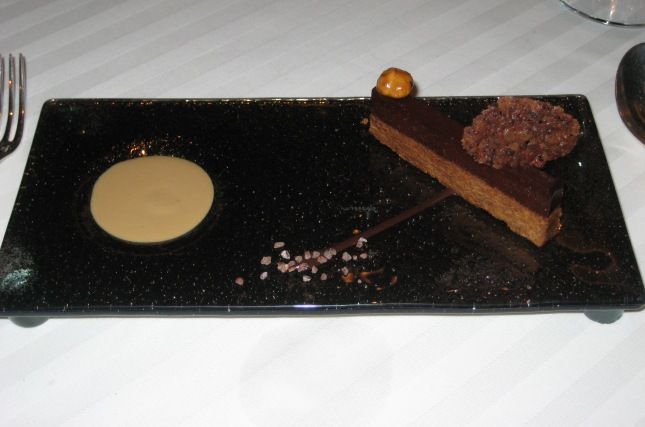 The staff somehow found out that a Keeper Team member had a birthday coming up and suddenly another dessert arrived – a white chocolate “egg” filled with raspberry compote and a candle – an interesting contrast to the other desserts. For most restaurants, this would be the end indeed. But in typical Parisian style, dessert was not over. 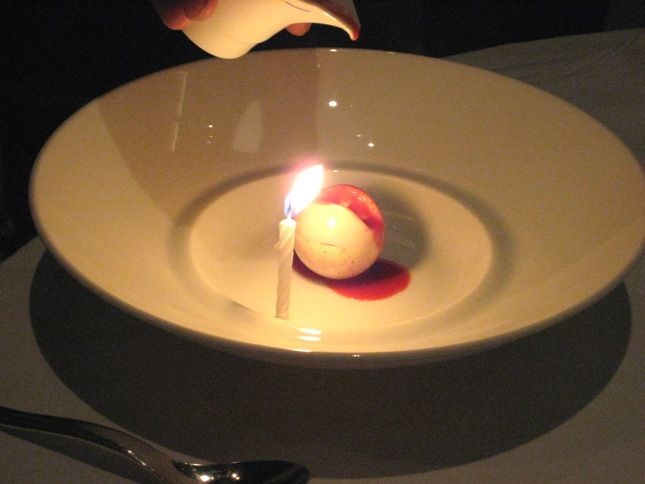 A candy platter arrived with our check. Despite our initial uncertainties about the Vegas interpretation of the French dining experience, we left feeling as if we had been in Paris with Guy Savoy! 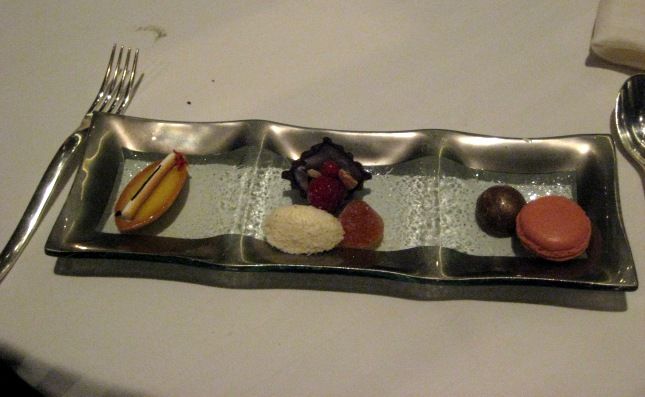 YES, our Parisian meal was authentic! Hats off to Guy and his Las Vegas staff for the real thing- no imposters here!