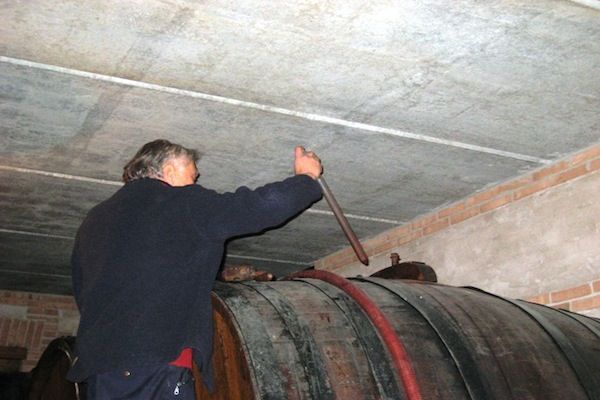 Starting the morning off with a caffeine fix is typical for the Keeper Team. While in Piedmont it was special to begin the day with a morning drive to the next village in Piedmont for espresso of choice, while being surrounded by the Alps along the way. Enjoying this panoramic view and knowing that there would be wine tastings and food pairings with Barolo Wine Masters was almost more than we could stand. So, Keeper took a deep breath, because we knew the adventure was just beginning.

After espresso in the village of Barolo, we went to visit Giuseppe Rinaldi (known to his friends as “Beppe”). Our friend Russell Hone of Le Serbet has known Beppe for years, and we were treated to a personal tour of the winery and a special tasting. Beppe was quite entertaining, and his wines were lovely. We tasted his 2006 Barolos out of cask, including his blend of La Coste and Brunnate, and his other blend of Ravera and Cannubi San Lorenzo. We also tasted Beppe’s Langhe and the two 2005 Barolos out of bottle, as well as 2005 Barbera, Dolcetta, and Rocche. 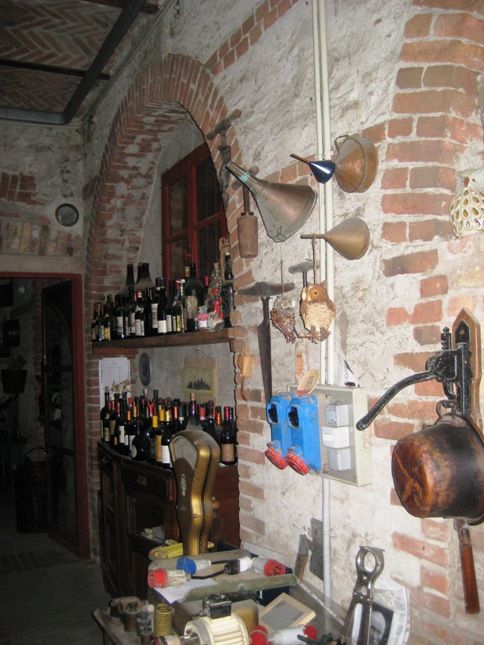 Beppe was a rather colorful man, which made our tasting even more interesting. He considers the telephone to be “like a terrorist”, and he rants about unwelcome intrusions whenever the phone rings. We could relate as we did not want modern inventions to intrude on the time with Beppe. As we were tasting, we nibbled on a 48 month cheese made by a friend of Beppe’s that owns every version of Masserati , including the Formula One model! Two rather unique hobbies – aged Italian cheese and Masseratis! 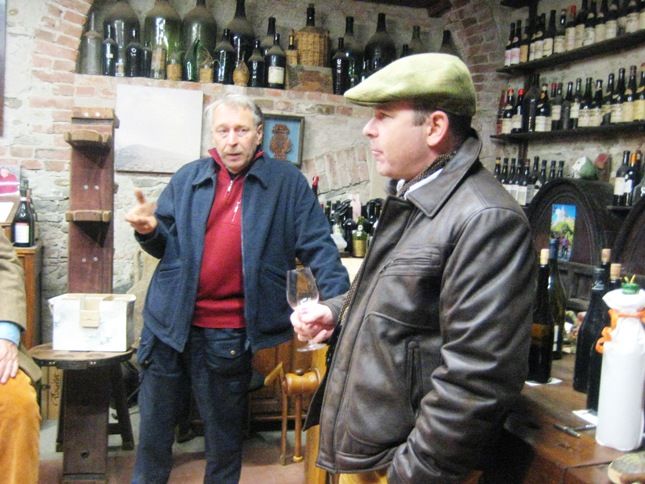 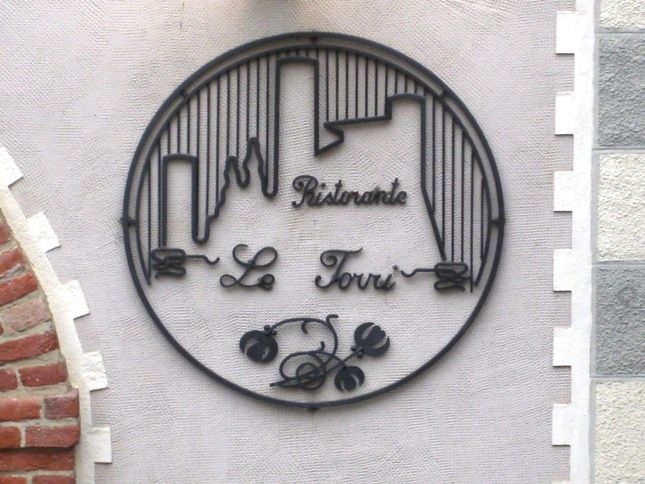 Apparently, the large number of invitees (11) made a restaurant more practical. Enrico (Paolo’s son) has solely headed up the domain until recently, but he has his daughter Elisa working front and center with him now. We were excited to have the opportunity to learn from all of them about the wines of Scavino during this lunch.

We had a large table in our own private room at Ristorante Le Torri, and the Scavinos brought wines from their cellar. We started with a Scavino white wine called Sorriso, which was a blend of Chardonnay, Sauvignon Blanc, and Viognier – 60% Chardonnay and 20% each of the other two grapes. Then we had a 1989 Bric del Fiasc from a 3 Liter bottle; a 1.5 Liter of 1999 Carobric, which is a blend of Cannubi, Rocche, and Bric del Fiasc; a 2002 Barolo Bricco Ambrogio (1.5 L); and a 1999 Rocche dell’Annuziata (1.5 L) with dessert! 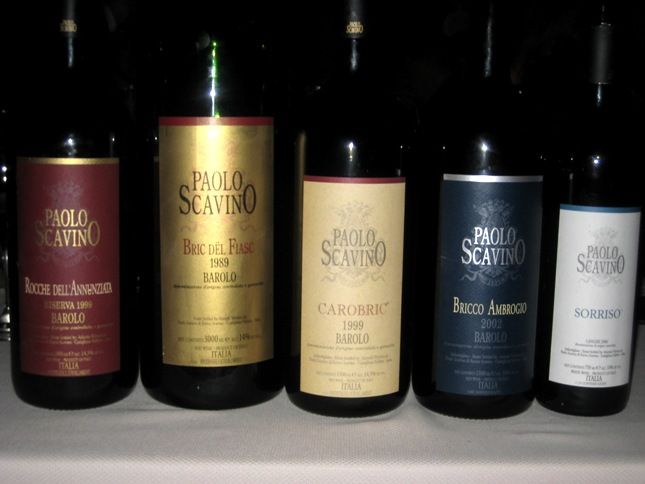 The Scavino team had selected the wines perfectly for the meal that was ahead for us to enjoy.

In addition to beautiful Scavino wines, Elisa Scavino guarded a Tupperware dish that contained 11 fresh white alba truffles – one for each of us to be shaved on our own individual egg dish. Most of us thought they meant scrambled eggs, because we had not had the Piemontese version of eggs with truffles. This was done by cracking an egg in a ceramic baking dish that had been coated with butter. They baked the dish in the oven so that the white was cooked but the yolk was not. The yolk was the brightest orange/red we had ever seen! Each dish received a personal truffle, shaved professionally in front of each guest. 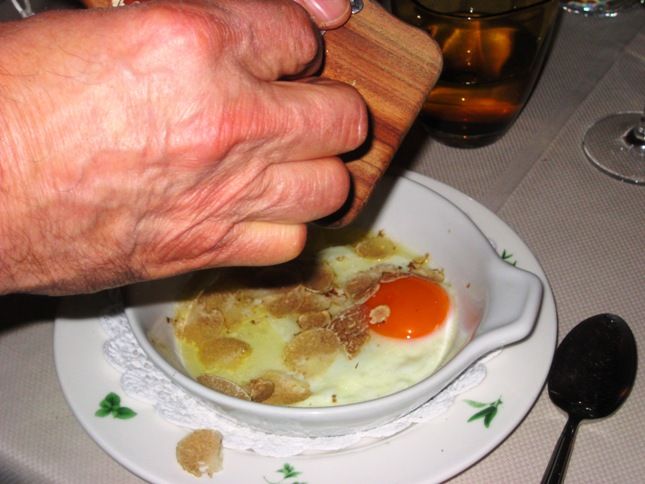 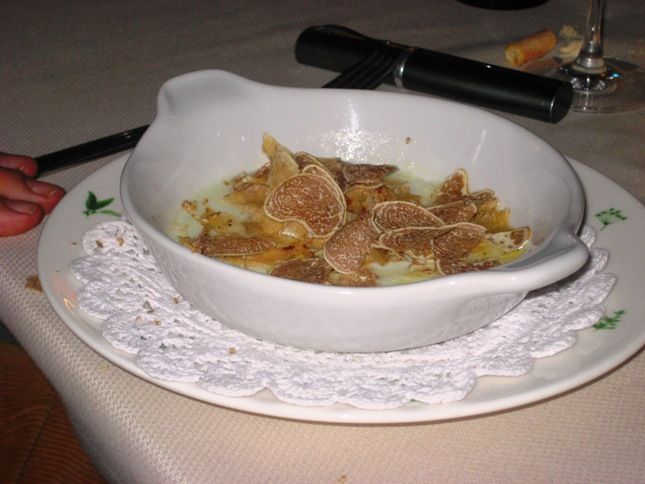 Elisa and Enrico were such generous and gracious hosts. We thought we were going to have the eggs first and then have 2 family style antipasti, which were to be Carne Crudo (beef tartare with 2 pieces of raw veal sausage) and Vitello Tonnato (the traditional Piemontese thinly sliced veal with Tuna sauce). But instead of serving these dishes family style, they brought a whole serving of each dish to each guest! We had already ordered our Primi and Secundi, and we soon realized the large amount of food that was still to come! The Primi dishes included Porcini Lasagna, Plin (which is pasta “packages” stuffed with meat and sage, cooked in butter), and Tajarine (the local area pasta cut into thin strips) with Porcini Sauce. One of the Secundi dishes was Roasted Rabbit. 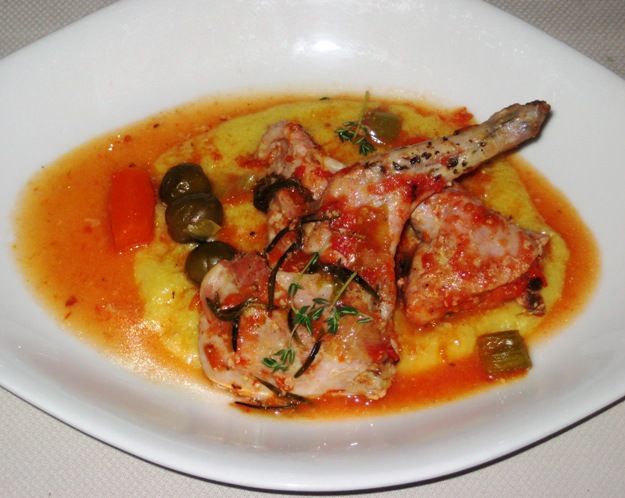 ...followed by a tray of 4 different finger desserts! 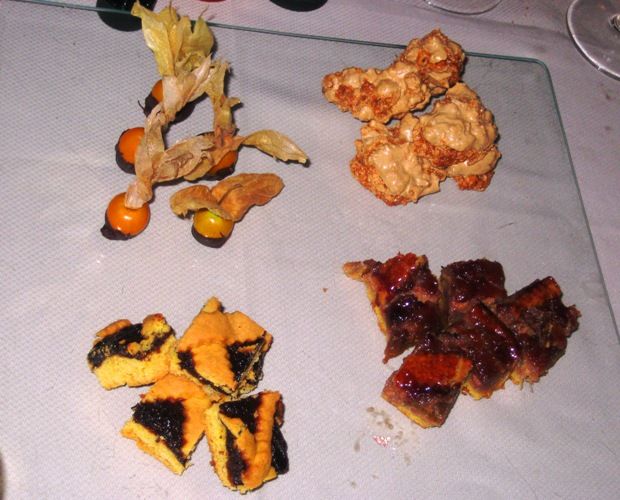 Thanks to the Scavinos for a lovely 3 hour lunch with beautifully crafted wines, delicious food, and new friends. Thanks also to the talented Chef Maria Christina and her staff at Le Torri – we look forward to a future trip to the area when we can eat there again.