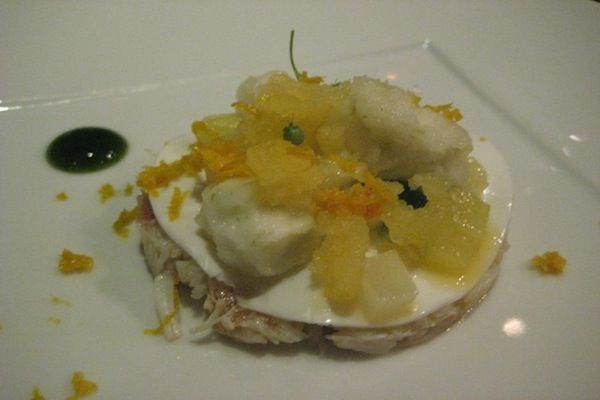 Chef Sean Brock of McCrady's had been on our radar screen for a long time – long before he won his recent James Beard Award for 2010 Best Chef Southeast. He works as a dedicated, modern “farm to table” chef. This work, growing fresh vegetables and grains at his own farm and in conjunction with other local purveyors of other local ingredients, is what inspired us to make a trek to Charleston for the Chef’s Tasting Menu.

As we walked the streets of Charleston to get to McCrady’s, we approached the awning on the main street of East Bay calling us to our destination. Little did we know that we would take the next alleyway to be able to enter – we felt an adventure ahead.

We were presented with bread that could be eaten with either fresh olive oil or salted butter. We knew to take only a small bite of each so we would not be too full for the tasting menu. We also perused the wine list and found some nice selections to complement the food we anticipated.

The adventure began when Chef Sean Brock appeared at our table to describe the first course as he zested fresh orange peel onto our dish. This dish was impressive and thought-provoking – Chef Brock explained that it was inspired by a special citrus-based cocktail that he had once enjoyed. He pointed out that the crab was caught locally by a good friend, with the crab being finely shredded and formed into a disk as the base of the dish. This was topped with a very thin disk of soft (not flaky) coconut. The next layer provided the unique toppings of a frozen sour mix, some pickled under-ripe mango, and tiny cilantro blooms. The cold temperature and texture of the frozen sour mix made the crab “POP” when you ate a bite. What a way to start.

The second dish featured a piece of local grouper. As the Chef presented this dish to us, he pointed to the next table of guests, noting that the fisherman who caught this grouper and delivered it to him, was dining at that very table. Chef explained that this dish had a Japanese influence. The base of the dish was pressed cucumber from his farm that had been soaked in yuzu juice. There was also a piece of nori, and a small dollop of Hon Dashi used to add a zip of flavor. The courgettes (zucchini) were preserved, and the grouper was perfectly pan seared. The real surprise was the bonito foam, which Chef served this tableside to finish the dish.

Grouper with Cucumber, Courgettes, and Bonito (before & after Bonito Foam)

This next dish confirmed our beginning thoughts that this chef is highly innovative and playful with food. The base was a “panna cotta” of sweet onions and artichokes. The chef later explained that they used a food gel so that it wouldn’t melt when they torched the top of the sweet onion/artichoke disk. This was topped with steamed lobster claws and then topped with the perfectly cooked, lightly-crusted, softly-textured sweetbread. The chef drizzled a sauce reduction to allow other playful taste combinations. 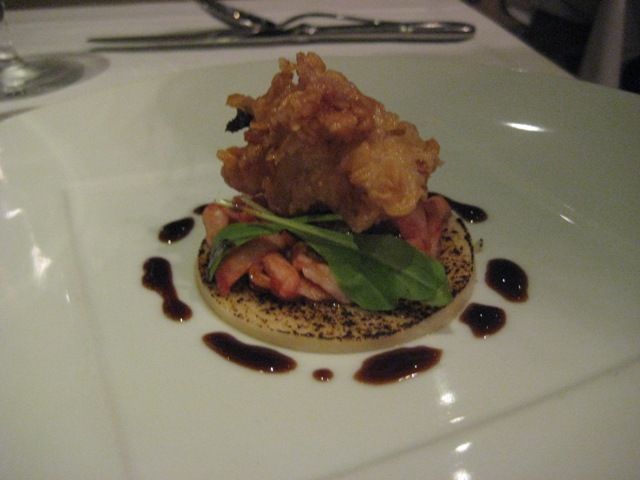 The next dish featured Pork Belly which had been sous vide for 20 hours and creatively combined with a rare variety of farro grown by Chef at his farm. The interesting twist on the dish was the pine flavor. 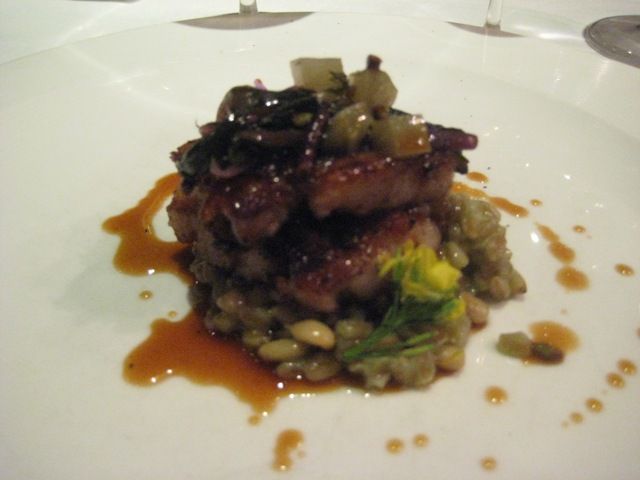 The beef in this next dish melted in your mouth like butter. The “marrow-stuffed potato puff” was perfectly cooked and paired well with the beef. 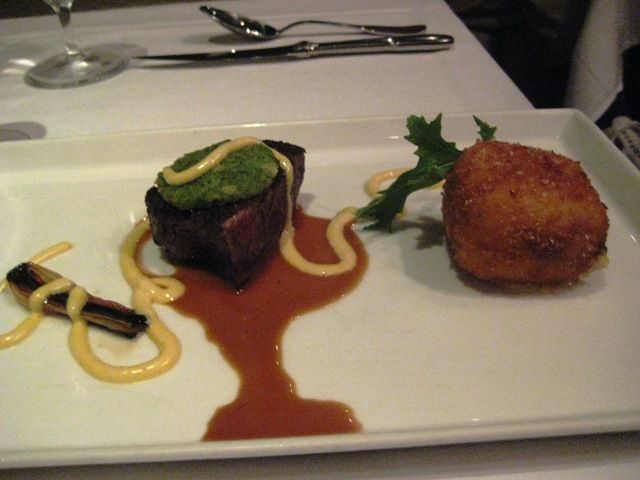 We only expected one dessert, but were surprised with a second dessert to commemorate a Keeper Team anniversary. The Chef and his staff did not miss a beat! 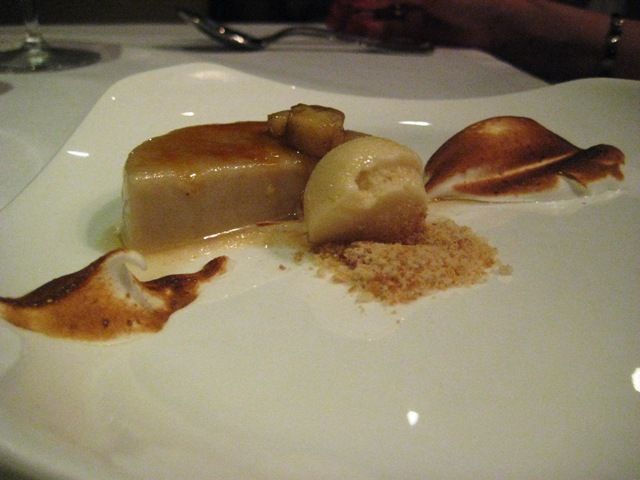 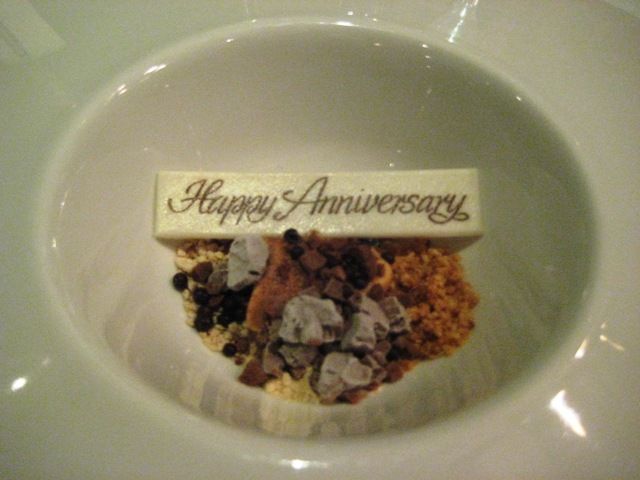 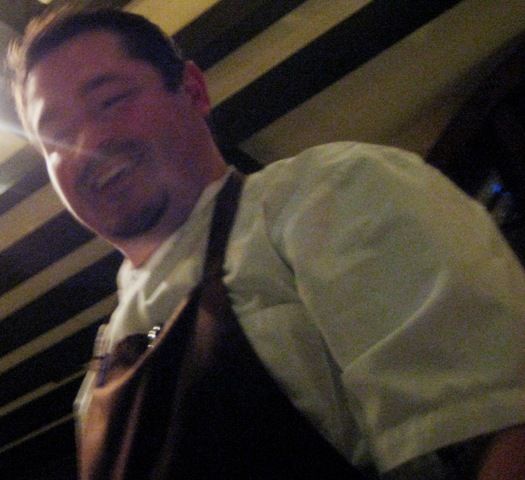 Chef Brock has an infectious smile and playful attitude about food and dining, making his guests feel inspired and rejuvenated. He told us that his mantra is to “Stay young – don’t lose the feeling”. The feeling of our experience with Chef Brock reminded us of a favorite childhood game, Red Rover. In this game, you want the strongest on your team to hold up your line. Chef Sean Brock is a first pick on the Keeper Team of Culinary professionals. After such a memorable evening, we look forward to the chance to play again with Chef Brock’s creations.