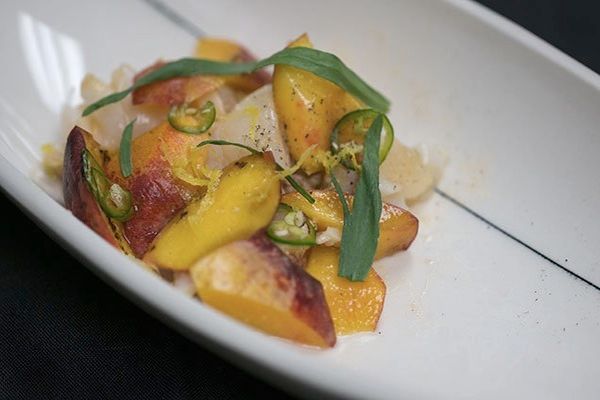 99 Problems and a Lobster Ain't One

What would you do if the main ingredient in your professional cooking competition turned out to be deadly? That was the problem Uchi's Lauren Ortiz faced at last night’s 86’d event (the local version of Chopped).

As emcee and chef Philip Speer announced the ingredients — whole live Maine lobster, Wahaka mezcal, smoked Serrano chiles and fresh peaches — Ortiz revealed her shellfish allergy. She wasn’t the only one. Judge Matt Clouser removed himself from the round and subbed in chef Callie Speer (both from Swift's Attic), but Ortiz carried on. Ultimately she turned out a superior dish of cold-poached lobster dressed in miso-garlic butter accompanied by peaches four ways (grilled, cured, fresh and pickled) and topped with sliced Serrano peppers. The kicker? She wasn’t able to taste anything as she prepared it.

Competition winner Ben Schwartz of Uchiko also turned out a delish-looking entrée of butter-poached lobster with mezcal Beurre Monte with lobster-and-peach-stuffed squash blossoms, grilled zucchini, raw summer squash noodles and grape tomatoes. It was his orange-oil crumble with tea ice cream and cucumber jam, though, that won him the gold, plus stages at Grace Restaurant and L20.

We’re impressed with all of these up-and-coming chefs’ resolve and talent, and we have no doubt we’ll see them leading the next wave of Austin’s kitchens soon.