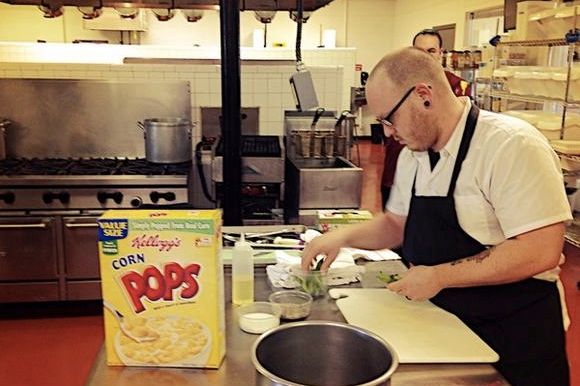 Chefs Compete in a Battle of Culinary Creativity at Citywide 86'd

One contestant looks perplexed as he eyes a plastic tub with two live fish swimming around, but with no time to waste, dashes off to the pantry to grab other ingredients. Colleagues, servers and friends cheer as they watch the chefs battle nerves, unfamiliar equipment and the clock to get their dishes to the plate.

The competition was started in 2008 by the Uchi restaurant group as a way to encourage creative innovation among their team.

For the last several months this scene has repeated itself as chefs from some of Austin’s most innovative restaurants have sharpened their creative culinary skills in the hopes of besting their peers in the annual Citywide86'd competition. Similar in format to the TV show Chopped, four contestants receive mystery baskets to prepare a dish in a short time period with one chef eliminated after each course.

The competition was started in 2008 by the Uchi restaurant group as a way to encourage creative innovation among the team. Anyone below the sous chef level could compete — including front of house staff — proving that great ideas don’t just come from the kitchen. As word spread, other restaurants wanted in on the action and Uchi expanded the competition in 2013.

“The competition builds character and morale for the individual chefs, and for the crew,” said Chef David Bull of Congress. “It breaks the monotony of the daily routine while bringing everyone together.”

Indeed the competition builds strong team camaraderie with everyone from the executive chefs to front of house staff showing up to cheer for their colleagues. The executive chefs often watch on with an almost parental eye, pacing nervously and quietly coaching their protégés under their breath, silently willing them to use the skills they have honed.

After an intense round of preliminaries, the 2014 finalists are Lauren Ortiz of Uchi, Ben Schwartz of Uchiko, Bradley Nicholson of Barley Swine and Murphy Parks of Searsucker. The chefs will compete against one another on Monday, June 16 from 6-9 pm at the AT&T Executive Education and Conference Center. Speer will emcee the event, giving guests the blow-by-blow from the kitchen, while Chef Josh Watkins of The Carillon, Chef Jason Dady of Dady Restaurants in San Antonio and Chef David Bull will judge.

The winner not only receives bragging rights, but also a trip to work under an esteemed chef in another city. Tickets are available for $75 and include bites from Café Josie, Uchi, Uchiko and other local restaurants as well a selection of beer and wine tastings.