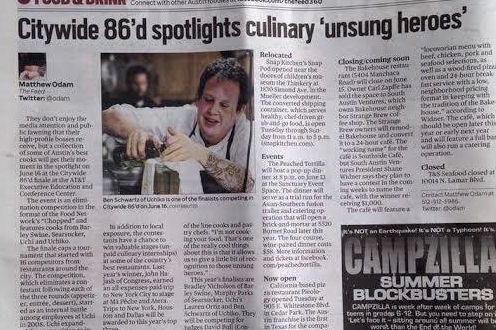 They don’t enjoy the media attention and public fawning that their high-profile bosses receive, but a collection of some of Austin’s best cooks will get their moment in the spotlight on June 16 at the Citywide 86’d finale at the AT&T Executive Education and Conference Center.

The event is an elimination competition in the format of the Food Network’s “Chopped” and features cooks from Barley Swine, Searsucker, Uchi and Uchiko.

The finale caps a tournament that started with 16 competitors from restaurants around the city. The competition, which eliminates a contestant following each of the three rounds (appetizer, entrée, dessert), started as an internal battle among employees at Uchi in 2008. Uchi expanded the competition to include Uchiko and Uchi Houston over the next few years, with winners receiving cookbooks and knives as prizes.

Uchi teamed with the Keeper Collection, the Wine & Food Foundation of Texas and the Auguste Escoffier School of Culinary Arts in a collaboration that broadened the competition to include eight area restaurants at last year’s inaugural Citywide 86’d. That number doubled this year. More

In addition to local exposure, the contestants have a chance to win valuable stages (unpaid culinary internships) at some of the country’s best restaurants. Last year’s winner, John Hajash of Congress, earned an all-expenses-paid trip to New York City to stage at Má Pêche and Atera. Trips to New York, Houston and Dallas will be awarded to this year’s top three.

“They’re more important than us,” Speer said of the line cooks and pastry chefs. “I’m not cooking your food. That’s one of the really cool things about this is that it allows us to give a little bit of recognition to those unsung heroes.”

This year’s finalists are Bradley Nicholson of Barley Swine, Murphy Parks of Searsucker, Uchi’s Lauren Ortiz and Ben Schwartz of Uchiko. They will be competing for judges David Bull (Congress), Jason Dady (Jason Dady Restaurants) and Josh Watkins (the Carillon).