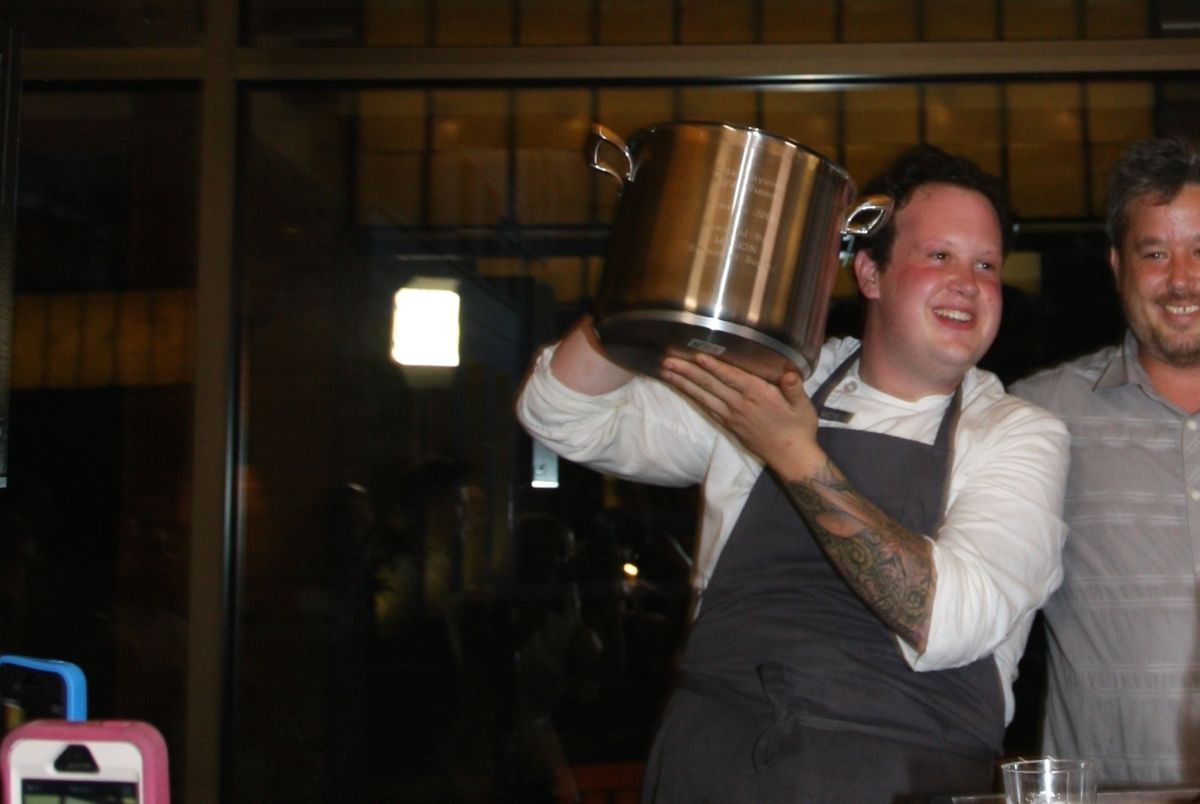 Citywide 86'd: The Finale is Complete! A New Champion Reigns!

That's the news, the part you need to – or maybe already do – know: Ben Schwartz of Uchiko defeated Bradley Nicholson of Barley Swine, Murphy Parks of Searsucker, and Lauren Ortiz of Uchi on the field of culinary honor last night at the finale of this year's hardfought Citywide 86'd.

Other information that's as necessary to the event as spice is to a good curry: Who the judges were. Answer: No less than David Bull of Congress Austin & Second Bar + Kitchen; Mat Clouser of Swift's Attic; and Jason Dady of San Antonio's DUK Truck andTwo Bros BBQ Market.

[Note: Callie Speer of Swift’s Attic filled in for judge Mat Clouser for one round, because Clouser is allergic to shellfish. And lobster – a whole lobster, people! – was one of the ingredients for that entrée round.]

And the competition, well, if you've ever seen The Food Network's Chopped, you'll recognize the sort of surprise-the-chefs-with-several-disparate-ingredients-and-then-have-them-cook-up-the-tastiest-dishes-they-can-with-them format. And the Citywide 86'd contest is also divided into three rounds: Appetizer, Entrée, and Dessert. And what were the secret ingredients that our gastrowarriors had to work with, there in the culinary theatre staged at the AT&T Center last night?

Check this out, dear foodie reader:

And in using these ingredients for the relevant parts of the meal, the chef who rated highest in the judges' seasoned estimation was (you remember from above, right?) Uchiko's Ben Schwartz. And he received, in addition to the thrill of victory and the admiration of all, the Mission Restaurant Supply Engraved Stock Pot, a one-week stage in two top Chicago restaurants (Grace with Chef Curtis Duffy and L20 with Chef Matthew Kirkley), and a $2250 stipend for travel expenses.

Tell you what, though: Even the talented and enchampioned Schwartz couldn't have been that many magnitudes happier than the culinary fans attending this Citywide 86'd throwdown. Besides getting to watch the action up-close and personal (or on the several well-placed video screens), attendees got to mingle and snack on exquisite bites from Barley Swine, Cafe Josie, Swift’s Attic, Trace, Uchi, Uchiko, Fixe, Searsucker, the Steeping Room, Noble Sandwich Co., theAuguste Escoffier School of Culinary Arts, and St. Philip. And got to wash that smorgasbord of paradise down with beer from Independence Brewery, gin cocktails by Revolution Gin, and six different wines.

Read the article on The Austin Chronicle by clicking here.