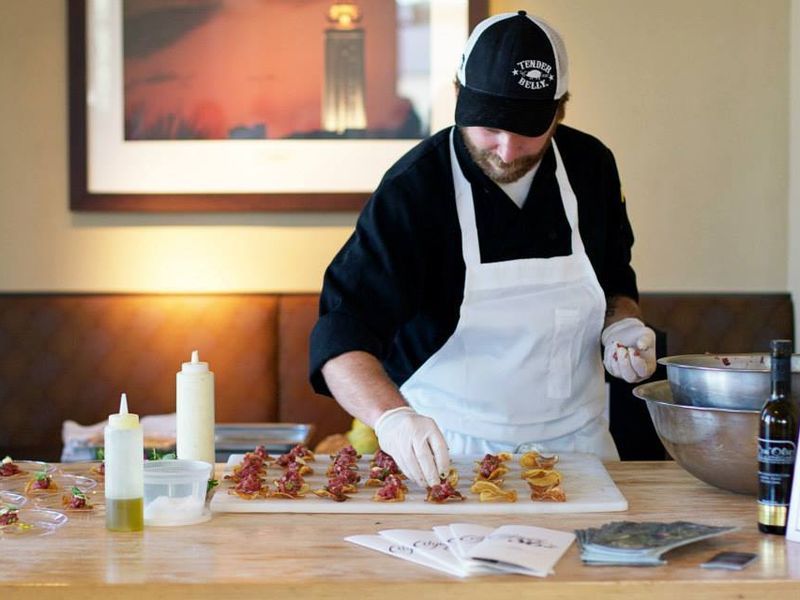 Four rounds will lead to the final competition in the summer.

Citywide 86’d, Austin’s own Chopped-inspired cooking competition where restaurant teams create three-course meals with on-the-spot ingredients, returns in February. The preliminary round features LaV, Parkside Projects, Qui, and Scarlet Rabbit/Greenhouse Craft Foods, on Saturday, February 7. This year, only one restaurant is allowed to represent a group, which explains why St. Philip is competing and Uchi and Uchiko aren't. Other restaurants include Lenoir, Barley Swine/Odd Duck, Hillside Pharmacy/Eden East, Contigo/Gardner, and more.

There will be four rounds all together, and the finale will be held in June. The winner will get to showcase at a known restaurant, as well as $2,250 in a travel grant.

86'd started in 2008 when Uchi chefs decided to throw their own inter-staff competition, which blossomed into the city-wide battle now. Last year’s winner was Uchi’s Ben Schwartz. The full press release is below.

January 20, 2015 (Austin, TX) —Uchi, along with Keeper Collection, The Wine & Food Foundation of Texas, and the Auguste Escoffier School of Culinary Arts, are excited to announce the preliminary competition dates for the third installment of Citywide 86’d as part of an ongoing effort to engage, support and connect the Austin restaurant community. The competition, in its third year, will take place on the following dates between the following restaurant groups at the Auguste Escoffier School of Culinary Arts:

(finale, ticketed event, open to the public, competitors depend on preliminaries)

Fans of Food Network’s Chopped will recognize the idea behind 86’d, a competition where contestants compete in elimination rounds preparing mystery ingredients on the clock. The winners of each round convene to compete in the finals and to declare one ultimate winner. The rules of Citywide 86’d prevent any restaurant staff above sous level from competing, with the competiton open to front of house staff as well.

The 86’d competition began at Uchi in 2008 as an internal battle between staff who were addicted to the show "Chopped". This battle grew to include Uchiko and Uchi Houston in subsequent years. "We are thrilled to witness how the competition has grown over the years," comments Chef Tyson Cole. "I love how Citywide 86’d recognizes the talented young chefs in Austin’s growing and tight knit culinary community."

The contest is divided into three stages: "Appetizer", "Entrée", and "Dessert". Secret ingredients are selected before the competition (seemingly non-compatible or wildcard items like pork skirt steak, prickly pear cactus and coffee beans have popped up in mystery bags) and in each course, the chefs are given the bag containing the four mystery ingredients. Each dish must contain all of the components and be completed in the time allotted for each course.

The final winner will receive an opportunity to stage (pronounced "stahzje") at a prestigious restaurant. Staging allows aspiring chefs the chance to work briefly in a celebrated chef’s kitchen to learn new techniques and cuisines. The grand prize stage is accompanied by a $2250 travel grant awarded by The Wine & Food Foundation of Texas. More details on the location of the stage are coming soon.

Fans are invited to cheer on the chefs for the preliminary rounds by following social media accounts @Citywide86d. More information can be found here: http://citywide86d.com/