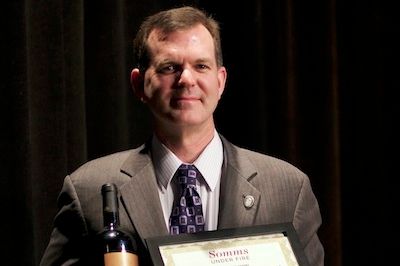 Local Sommelier Runs the Table at Somms Under Fire 2014

By Virginia B. Wood - The Austin Chronicle

The Keeper Collection, LLC announced today that Nathan Prater was the winner of the annual Somms Under Fire Wine & Food Pairing Competition held Sunday, Jan. 26 at the UT/AT&T Executive Education and Conference Center.

The evening began with a Sake One Saktail Quick Mix Challenge where each contestant had to create a cocktail using Sake One Sake Moto. Prater started his big winning evening with a Saktail called Mizu, made with Sake Moto, orange, lemon, lavender, and rice wine vinegar.

Prior to being chosen to participate in the event, contestants were scored on a theory-based entry exam. During the competition, each contestant had to choose "perfect" wine pairings for a three course meal and then submit themselves to a panel of expert judges for explanation and critique. During the event, audience members were encouraged to text their votes for a Fan Favorite Sommelier. Prater came out on top in all four portions of the evening's competition.

The grand prize for being named 2014 Somms Under Fire winner is a wine internship in the Burgundy wine region of France augmented by a $1,000 stipend provided by the Wine & Food Foundation of Texas. As the finalist who scored highest on the entrance exam, Prater received the 2014 Magnum of Excellence, a 2008 Paolo Scavino Barolo Monvigliero. And for being named Fan Favorite Sommelier, he was presented with a Laguiole Champagne Sabre. Kudos to Nathan Prater for his big wins this week. For a taste of his magic, drop by and check him out at work.

Read the article on The Austin Chronicle by clicking here.