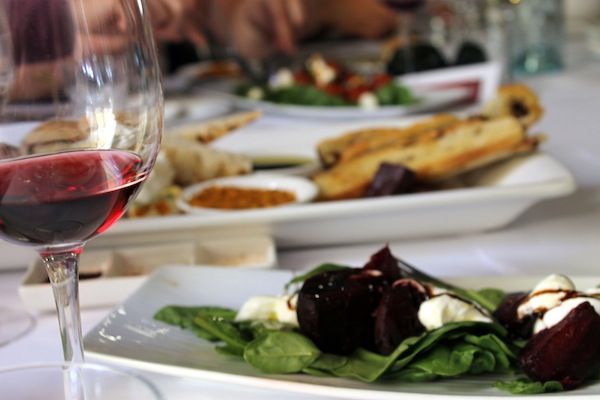 Sommeliers compete in 'Wine Olympics' during Somms Under Fire

In just over two weeks, some of the world’s best athletes will compete in the 2014 Winter Olympics in Sochi. Whether it's speed skating or snowboarding, the one thing that is certain is that the athletes have trained like mad to make it to the big stage. Here in Austin, we're hosting a mini Olympics of our own. But this is for wine. Three sommeliers will battle in a test of wine and food pairings in Somms Under Fire on January 26, at the AT&T Executive Education & Conference Center on the University of Texas campus.

To earn a spot in the competition, more than two dozen applicants from nine states took an insanely difficult — and timed — written exam testing their wine knowledge. The three people who scored highest and will now go head-to-head are advanced sommelier, Paula de Pano, of Fearrington House in Pittsboro, North Carolina, advanced sommelier Nathan Prater, of Wines.com in Austin, Texas, and certified sommelier James Watkins of Cordua Restaurants in Houston, Texas.“Becoming a sommelier and competing in this contest takes an incredible amount of training,” said Devon Broglie, the Somms Under Fire emcee. “Any sommelier that wants to compete in this event has to make sacrifices while accepting an overhanging cloud that they might not be successfully achieve it. Just like with the Olympics, there is no guarantee that the hard work will pay off. These three have the pressure of not only knowing their wine, but also performing in front of an audience and a panel of judges including two master sommeliers.”

The judging panel is set to be more intimidating than a Russian figure skating judge. Global wine consultant, Peter Wasserman, returns from Burgundy to serve as judge. He will be joined by James Beard Award winning wine writer, Jordan McKay, from San Francisco, Copain winemaker, Wells Guthrie, from Sonoma County and the winemaker from Castiglione Falletto Winery, Elisa Scavino, from Piedmont, Italy.

Now in its third year, Somms Under Fire is no longer drawing only local contestants. As the event grows in notoriety, it is attracting a national audience. In fact the three stand-by contestants are from Atlanta, Chicago and Washington D.C. It doesn’t hurt that the Grand Prize is a one-week internship in Burgundy, France led by Master of Wine and Burgundy expert, Jasper Morris.

There will be local flavor as contestants to pair three courses created by Chef Shawn Cirkiel of Parkside Projects (Parkside, Olive & June, Backspace and the forthcoming Chavez) paired by the contestants with wines from around the world. Guests will get to sample each wine and food combination.

Diane Dixon, founder of Keeper Collection, LLC, the event organizer, said, “Shawn is a huge proponent of treating food and wine professionally. He wanted to participate in this event to have his food associated with wine professionals who know how to match wine with great food. The fun will be that the sommeliers will be surprised by the food he prepares and the types of wine available to pair with it.”

In addition to being judged on wine and food pairings, the sommeliers will also have a second challenge in their beverage biathlon. The QuickMix Cocktail Challenge will test the sommeliers’ ability to make a delicious drink using saké instead of spirits. Bartender Jason Stevens of Congress Austin, returns to judge the “saketail” competition. The contestants will create their own recipe using no more than two ounces of sake to make a three ounce cocktail using no other spirits. Ingredients can cost no more than $1.00 per drink. Stevens will award points not only for the flavor, but also for the sommeliers’ story about how the ingredients selected reflect their personality. Audience members get to drink the results.

The whole event starts with a one hour VIP session hosted by noted Burgundy expert Peter Wasserman, who will pour five classic vintages of Burgundy wines. He will describe how weather affects each vintage, how sub-regions vary in style and give guests tips on learning to love this coveted French wine region.

Read the article on CultureMap Austin by clicking here.